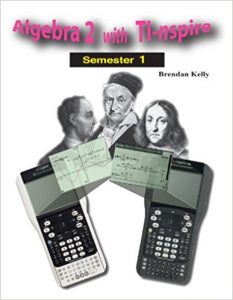 This book develops the first half of a full course in Algebra 2 using the TI-nspire technology (version 2). The topics are introduced in a highly motivational way, using cartoons, human interest items, and real-world applications that connect the mathematics to the student's interests. Each lesson begins with a motivational introduction, followed by worked examples that showcase the solutions with and without the TI-nspire technology. Keying sequences are provided for both TI-nspire and TI-nspire CAS. Each unit begins with a display of the TI-nspire menus that will be used throughout the unit. Only the appropriate menus and commands are employed so that the mathematics is not subordinated to the technological procedures. There are complete solutions to all the exercises.

The table of contents is as follows:

By Barbara Henley
Rating: ★★★★★
I have several of Brendan Kelly's books and am familiar with other works of his in the educational arena. He is by far one of the best educators I have seen, and I come from a huge family of educators. His books would be well worth the price-even at double what he charges. The books are written plainly with step by step directions, and is written in a humorous, fun, and an easy to understand way. I highly recommend any of his books.

By Margaret Thornton
Rating: ★★★★★
Brendan Kelly has written some of the finest math books ever seen. Whether you are a student, teacher, or a casual reader you need these books. There are new interesting things on every page. They would be worth reading even without the aid of a TI Nspire CAS. With it they are dynamite.

Texas Instruments Nspire CX CAS Graphing Calculator
Featured a Computerized Algebra System (CAS) that enables a deeper understanding of abstract concepts in math and science, making this calculator ideal for professionals or academics who deal in abstract physics or other sciences.