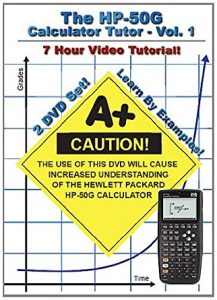 Unlock the Power of your HP-50 Calculator

The HP50g Calculator is the flagship calculator from Hewlett Packard that can handle many advanced math functions that are used in science, engineering, and high school AP classes. Unfortunately, the calculator itself can be difficult to use if the student doesn't take the time to learn the functions.

This DVD set will teach the student how to use the HP50g using step-by-step video examples. This way, the student learns by doing rather than reading a dry manual!

By Paycheck
Rating: ★★★★★
Outstanding scientific functions. Outstanding programmability. Exceptional value. RPN mode is extremely powerful and versatile. I was able to reuse my previous HP28S and HP48 programming experience with little or no learning curve for mathematical and physics applications.

I bought this as a replacement for my beloved HP48SX which I purchased in 1990. The keyboard was starting to go out, but it hung on until a few months ago. I had this calculator in a drawer and dug it out.

The main thing I don't like about it is it isn't a 48SX. The feel and quality aren't quite as good, but you just aren't going to find that with made in China stuff. It has all the same functionality, but the menus are different. I'm an electrical engineer, so I do a lot of work with imaginary numbers. I wish the 2D vector function was accessible with fewer keystrokes, but that's my main complaint. This calculator has many more features, but I do that stuff already on a PC.

Best thing is it still have my beloved RPN. From what I've read about the HP Prime calculator, I don't think the RPN quite operates the same.

Maybe this one will keep rocking for another ten years ago. My old 48SX put up with a lot of abuse, but I don't think this one is as rugged.

HP 10s Plus Scientific Calculator
User-friendly design, easy-to-read display and a wide range of algebraic, trigonometric, probability and statistics functions for your math and science classes, with 240 built-in-functions to solve math and science problems quickly.